Our pilgrimage to Mount Athos 2011 started in Amsterdam. After a short break in Budapest we arrived in Saloniki. We choose not the spent time on travelling by bus, so we asked a taxi driver to wait for us at the airport. With the help Jan Paul ten Bruggencate we booked a taxi for € 120 from a nice guy named Fotis (tel 00 30 693 6955000). This friendly and English speaking taxidriver brought us in 2,5 hours to our hotel Akrogiali, with a view over the Meditarrenean Sea (from October low season prizes € 16 – 20 for a triple or double room).

View of Athos/Chromitsa from hotel Akrogiali

After a lovely meal with sea-bass at Kritikos, one of the best restaurants in town, we passed the old tower, where Sydney en Joyce Loch once lived, now a museum. 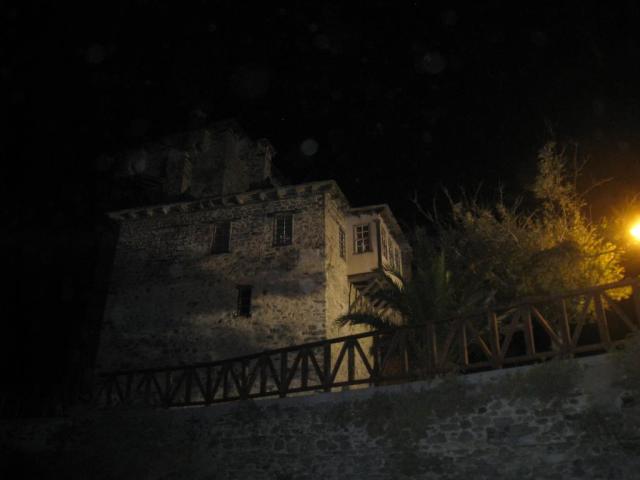 Next day we had a look at the new pier being build on the north side of Ouranolpoli, near the Pilgrims bureau.

Later that morning a high ranked Russian clergyman took a speedboat to Athos.