I found these fine pictures on a Russian site, some of them taken with wide angle lens. You can read about the wonder of a beggar who visited Iviron in 1917 an how the archondaris had to refuse him entering the monastery, because it was too poor to welcome visitors. When the guestmaster asked the beggar to wait to get some bread, the beggar spoke some words and his face became shining and invisable ! Afterwards it showed out that the beggar was Christ himself who appeared ! (Dear Adrian and Aleksandros, thanks for your commends, yesterday evening I did not take enough time to get the right information with these pictures).

Iviron: the boat house and a small building. This is the spot where, according to the legend, the Mother of God landed on Athos and called it “The Garden of the Holy Virgin”, and where she proclaimed that no other women could enter. 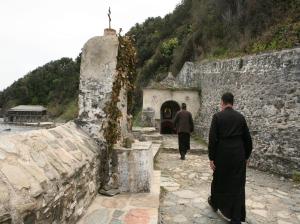 Inside the well, with a icon of the Panaghia and the child Jezus

Drinking water from the well 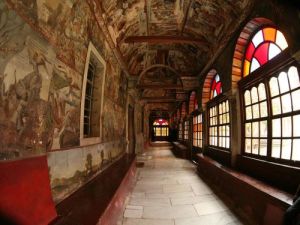 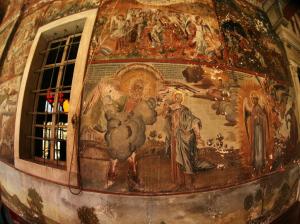 Iviron – fresco’s of the Apocalipse in the exo-narthex (Revelations 10, 9-11)

Iviron – the chapel with the famous Portaitissa, the wonder-icon next to the gate of Iviron. It was in my first hours of a trip to Mount Athos in 1980, when I saw a monk making at least 100 kneelings in front of this icon, bowing his head to the floor. I was deeply impressed by this act of worship! 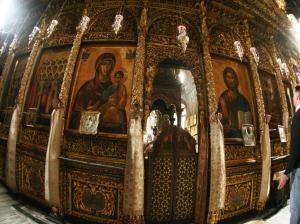 Iviron – iconostasis with icons of the famous Theofanes of Crete 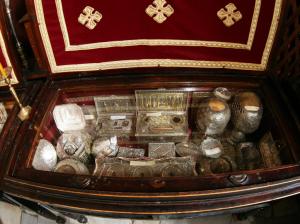 This entry was posted in 03 Iviron. Bookmark the permalink.

4 Responses to 1223 – Iviron: pictures from Russia