Posted on February 9, 2011 by athosweblog

As you can see a thin grey line leads from Grigoriou upwards: this is a gravelroad, not drawn yet on the latest Zwerger-map (see below). Even on the Road Map Edition 2007 this road is missing.

But that did not mean the old footpath was totally lost, as happened on the other side of the Mountain, when the road van Karyes to Lavra was finshed. I was lucky to walk this magnificent path in 1980, when I visited the Holy Mountain for the first time. Sadly there are no traces of the path left …. 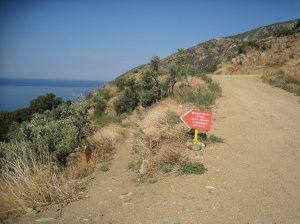 Down below: Arsanas Simonospetras. Note the small hut on the right. 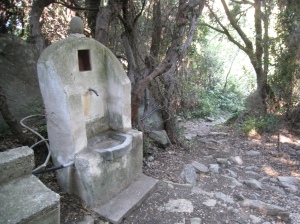 A dry well somewhere along the old path. 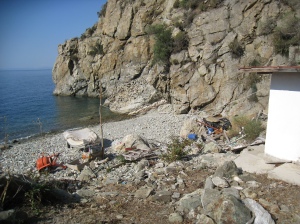 The small hut with rubber boat and mixer to make concrete. At this place the small brook ‘Chrendeli’ flows into the sea.

A large kellion along the valley of the brook. Here the path goes up again and a steep climb follows. 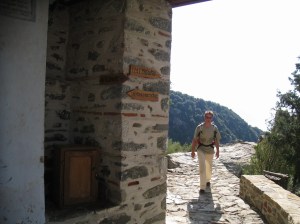 The well just above the arsanas of Simonospetras, with pilgrim Peter arriving. This spot is good example that the Zwerger-map is still the best there is for hikers, because the junction between the paths leading to both monasteries and the arsanas, is clearly shown on his 2004 map. The Road map just gives rough idea of how the paths lead. 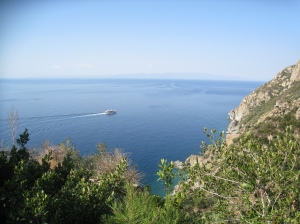 The Agia Anna boat sailing to Dafni, seen from the well above Arsanas Simonospetras

And than, this overwhelming view of the monastery Simonospetras, on the ‘rock of Simon’.

A wooden door leading to the gardens of Simonospetras

The gardens of Simonospetras