Posted on January 5, 2011 by athosweblog

“Two senior monks from the Vatopedi Monastery, which has been implicated in an allegedly corrupt land-swap deal with the state, were yesterday (21th of december 2010) given 10-month suspended jail sentences by an appeals court in Thrace for being moral accomplices to a breach of duty. Ephraim, the monasteries former chief monk, and Arsenios, its ex-financial manager, were accused of colluding with Maria Psalti, the former judge of a first instance court in Rhodope, northern Greece, where tracts of land involved in the swap are located. Psalti also received a 10-month suspended sentence for delaying making public a ruling on the ownership of the land” (from: ekathimerini.com). 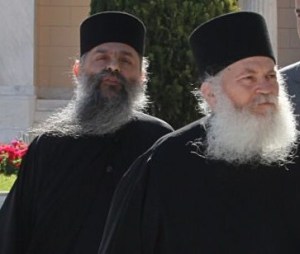 This entry was posted in 02 Vatopedi, news and tagged land-swaps. Bookmark the permalink.