1112 – Vatopediou and the Greek financial crisis: an article in Vanity Fair

In this long but very interesting article you read about Greek financial crisis and the role of Vatopediou. The writer visited the monastery and had a long conversation with the financial man of the monastery, Father Arsenios.

Here a part of his article:

That changed on October 4 of last year, when the Greek government turned over. A scandal felled the last government and sent Prime Minister Kostas Karamanlis packing, which perhaps is not surprising. What’s surprising was the nature of the scandal. In late 2008, news broke that Vatopaidi had somehow acquired a fairly worthless lake and swapped it for far more valuable government-owned land. How the monks did this was unclear—paid some enormous bribe to some government official, it was assumed. No bribe could be found, however. It didn’t matter: the furor that followed drove Greek politics for the next year. The Vatopaidi scandal registered in Greek public opinion like nothing in memory. “We’ve never seen a movement in the polls like we saw after the scandal broke,” the editor of one of Greece’s leading newspapers told me. “Without Vatopaidi, Karamanlis is still the prime minister, and everything is still going on as it was before.” Dimitri Contominas, the billionaire creator of a Greek life-insurance company and, as it happens, owner of the TV station that broke the Vatopaidi scandal, put it to me more bluntly: “The Vatopaidi monks brought George Papandreou to power.” 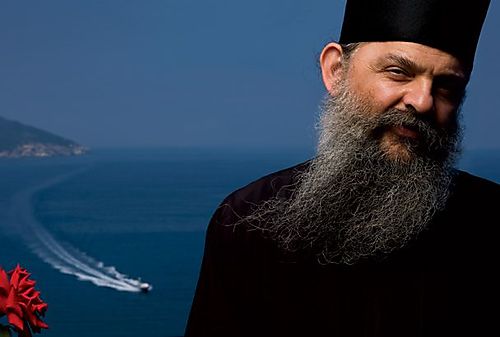 Father Arsenios the CFO of Vatopediou

Here an example how business was done:

For instance, after a famous Spanish singer visited and took an interest in Vatopaidi, he parlayed the interest into an audience with government officials from Spain. They were told a horrible injustice had occurred: in the 14th century a band of Catalan mercenaries, upset with the Byzantine emperor, had sacked Vatopaidi and caused much damage. The monastery received $240,000 from the government officials.

It takes a while to read the whole article, but I think it is worth it, because it explains a lot about the current situation in Greece and the mentality of some Greeks (how NOT to pay taxes)!

This entry was posted in 02 Vatopedi, news. Bookmark the permalink.

9 Responses to 1112 – Vatopediou and the Greek financial crisis: an article in Vanity Fair