Posted on September 6, 2010 by athosweblog

It was an extremely pleasant coincidence that I was able to buy one of the classic books about the Holy Mountain. (The book was announced in blog nr.852).

The book, coffee table sized, describes the trip to Athos the illustrious trio made in june 1964. They went on this expedition in their belief that they were probably the last who witnessed a vanishing world. The monks were old and their numbers were diminishing rapidly by about 100 a year.  So they calculated, in a linear way, that in the year 1975 Athos would be uninhabited, perhaps with the exception of a few monasteries. They explained the lack of attraction for young people to become a monk out of economic reasons (the country is richer, the monasteries poorer) and because monks are often ridiculed (`by their countrymen as a bunch of foolish old perverts who have failed to keep up with the times`). They state: `the fundamental, unanswerable fact is that Mount Athos had become an anachronism, and one which modern Greece is no longer able to indulge. `

They speculate about Athos’ future and they foresaw a gigantic holiday resort (as was suggested in the 19th century), that the Patriarch would come out of Istanbul or that is may be taken over by a charitable foundation, like Dumbarton Oaks of Gulbenkian.  `Meanwhile, we can only wait for the eventual collapse, and try to assess the extent of the inevitable loss.`, they state.

In a historic sense Graham Speake´s Renewal in Paradise is the antitheses of this book. Speake quotes this book (`Athos is dying and dying fast`. The disease as incurable. There is no hope.`) and finds it the most depressing of all comments on Athos.

But, with the exception of the doomed and depressing forecast, it´s a fine book. John Julius Norwich gives an historical introduction of the Holy Mountain and Reresby Sitwell writes an entertaining description of their travels. It is full of nice details. For instance the vehicle with licence plate AO 01 is a coach.

Street scene in Karyes with the coach AO 01. Picture by A. Costa.

A hilarious scene is when John Julius takes a bath and the guest-master appeared: .. `he took one look at me and exploded. Never have I seen anyone so angry. The flood of hysterical Greek that poured from the depths of that enormous beard was largely incomprehensible to me, but his message was plain. I was now compounding the sacrilege by standing stark naked under the very roof of the Grand Lavra. I was the Whore of Babylon, I was Sodom and Gomorrah, I was a minion of Satan sent to corrupt the Holy Mountain. I was to put on my scabrous clothes at once and return with all speed tot the foul pit whence I had come. `

He describes the unresolved feelings of the monks towards the works of art. Mainly a reaction to unscrupulous visitors , like Robert Curzon (in 1837) who took advantage of the innocence and gullibility of the monks and he stripped the Mountain of many of its more easily removable treasures and a Russian man called Uspensky who removed nearly all the best icons on the Mountain.

Some of his sentences stick to the mind. Like this one: ´Athos has seen the deaths of many men, but the birth of none.`

He explains customs like the semandron. The katholikon, standing free in the middle of the courtyard represents the ark of salvation. The semandron echoes the sound of Noah´s tools summoning the chosen to join him while time yet remains.

The second author, Sir Sacheverell Reresby Sitwell, 7th Baronet, died last year. He was the owner of Renishaw Hall, a stately home in Derbyshire. He did not write a lot. The only other publication by his hand was , a small book about his family, Renishaw Hall and the Sitwells, published in 2001. He made exhibitions in his , in the stable block in the ground. In the summer of 2007 he displayed a collection of wartime memorabilia, including Field Marshal Montgomery’s pyjamas, Goering’s cufflinks, Mussolini’s cigarette case and the swastika-covered nightdress of Eva Braun, Hitler’s mistress.

Reresby Sitwell in front of his stately home.

The first author John Julius Norwich is an English historian, travel writer and television personality. The Athos book is his first publication. Later he publicized many books, among which three about Byzantium and about many other subjects. He is a viscount. So the whole Athos book is written by nobility. In june 1964 when they visited Athos, his mistress, Enrica (Ricki) Soma Huston, was pregnant. She gave birth to Allegra Huston in august of that year. Allegra was not aware of her real father, she found out about him years later and she wrote a book about her family background, called ´Love child ´ which was published in 2009. Probably a good timing of John Julius to visit the Holy Mountain in that period, which must have been stressful for him personally. He writes: `that feeling of peace and serenity which is still, perhaps, the greatest single benediction that the Holy Mountain can confer`. Peace and serenity that is what found on Athos in what must have been a confusing time in his life. 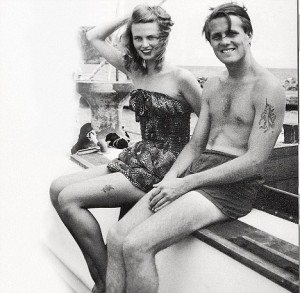 John Julius Norwich in his young years with his first wife.

The book is nicely illustrated with large colored and black and white photographs made by the authors and by A. Costa. The pictures are not special in the sense of artistic quality, but give a good impression of the situation in the early sixties.  There is no further information on the internet to be found about the photographer A. Costa. It would be interesting to find out whether he has got more pictures about the Holy Mountain which are not published in this fine book.

Two pictures. Above the gallery of Ronanov portraits in the reception room at St. Panteleimon. Under we find the guestmaster of St. Paul´s. Both pictures taken by J.J. Norwich.