We woke up early on our second day on Mt. Athos to see the sun rize.

A rich breakfast at Mylopotamos with Father Ioachim, Father Prodromos and Bas

Father Ioachim prepaired a take-away lunch for us, properly packed in plastic. After that we split up and I said goodbye to Herman’s group, but not after my own plastic bottle was filled up with home-made Tsipourou and many good wishes for this days journey, that was about to begin.

A final view of the Mylopotamos complex and its vineyards (a)

The path from Mylopotamos to Filotheou. Because detailed maps of this path are missing, I tried to draw my own course of the path, but it is not 100% accurate. The letters refer to the place where the pictures were shot. 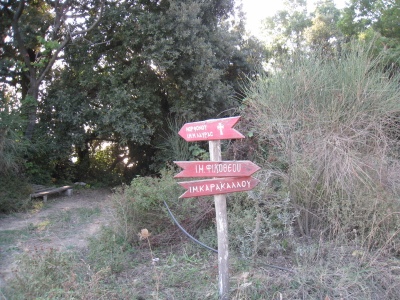 The junction to Lavra and Karakallou/Filotheou (c) 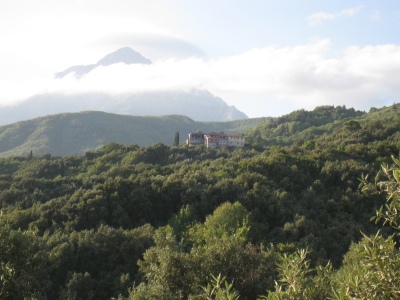 To the South: the cell (kellion) of Ag. Dimitrios and Mt. Athos (e)

Sign at the start of the path to Filotheou (d)

A short film, where the path crosses the road twice (d).

A sign to Kelli Ag. Konstandinou & Elenis (see nr 94 on the Road Map) 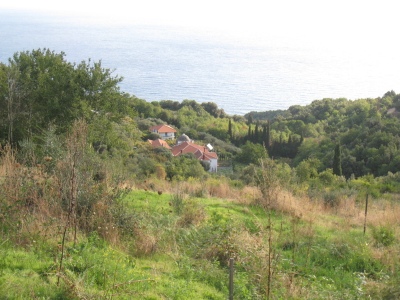 The same kellion with signs to Iviron and Arsanas Filotheou (f)

A cross of the kellion Ag. Georgiou (g) 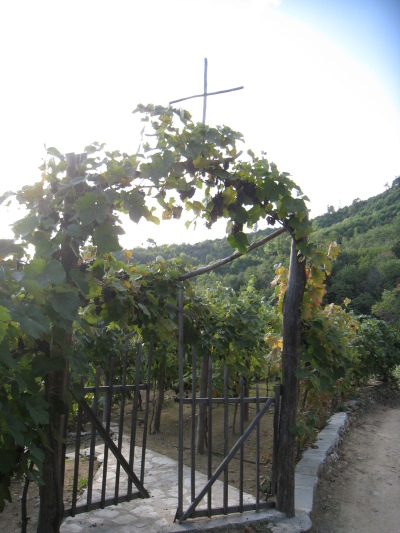 The garden: cabbage and tomatoes (g)

and grapes at Ag. Georgiou (g)

And I end this blog with a picture to the North of the Magoula settlement, with a few houses of Karyes on the background (h).

Next time more about Filotheou!

This entry was posted in 12 Filotheou, Mylopotamos, trip 2009: Wim's group. Bookmark the permalink.