Sometimes all things fit. That late September day in Mylapotamus was such a day. After we arrived (see post 2022) on foot from Karyes we set ourselves on the terrace. There is a splendid view, a beautiful coastline, vineyards in front of us and an open view to the Holy Mountain. YouÂ´re actually on the foot of the mountain. The terrace is situated well above the sea but you can hear the waves hitting the rocks. We were received most kindly by father Ioachim and felt at ease after a long walk all the way from Panteleimonos. We were offered an traditional welcome with coffee, Tsipourou and loukoumi.

We had a nice and light conversation with father Ioachim. Later some other fathers arrived for a drink. With my binoculars we looked at the cross and the chapel on top of the holy mountain and we simply enjoyed the September evening sun shining on the Holy Mountain. We came to a rest.

After the meeting we went for a stroll while Father Ioachim prepared our dinner. A first we visited the winery, just down the road. We were welcomed by Margarites, the winemaker. After that we walked along the deserted beach .The quietness and remoteness of the beach are overwhelming. Everywhere else in Greece, or indeed the Mediterranean, there would be hotels, bars, bathers, children, music, cars, noise. Not here. Just the sound of the waves and the wind. No one on the beach. Just rocks and pebbles. No development except for a boating house. There we watched the sun go down.

After the walk we were offered a lovely meal made by father Ioachim. And we had another warm conversation at the dinnertable. Margarites and some Albanion co-workers were there as well. We chatted about winemaking, the market and enjoyed the food.
After dinner Father Ioachim offered us a peek in his library which can be found in the tower of Mylapotamus. The tower can be reached from the small courtyard after a couple of steps. The tower has got an octagonal shape. Around the walls are bookshelves. 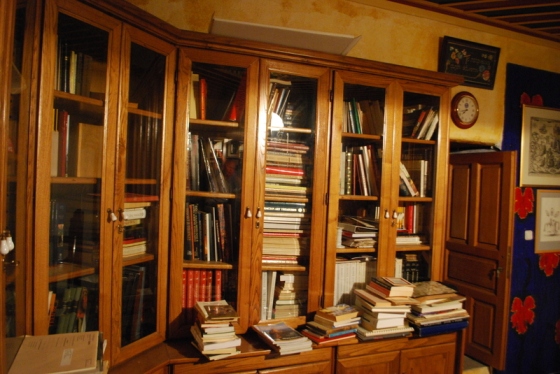 Father Ioachim showed us several of his favorite books. He took all the time. From the tower there is a door leading to a small balcony. A special place during the night. With only a few lights of Athos and some distant lights from islands around, like Limnos and Thassos. I especially liked the woodprints of all the towers in Athos, made by a monk. There is a woodprint of Mylapotomus as well.

There was also a book with reproductions of the ancient Ptolemy (Claudius Ptolemaeus) map of Greece in which Athos was clearly recognizable. Father Ioachim told us that in wintertime he spend many hours is the tower. Imagine him there. A man among books in the silent winter nights. Far from the madding crowds. Sometimes I think of him, sitting and reading there in his study.

Here Father Ioachim is pointing out Athos on the Ptolemy map. Pilgrim Wim is holding his camera.

After the visit of the library Father Ioachim offered us a drink in his apartment. We happily accepted the offer. We all had cognac. Pilgrim Jaap spilled his glass. But the damage was smoothly recovered.
Then it was time to go to bed. To end this special evening. Outside it was dark. A strong wind blowing, leaves and trees moving. Mysterious moonlight. Clouds rushing in front of the moon. I took my camera. Placed it on the terrace and pushed the button. 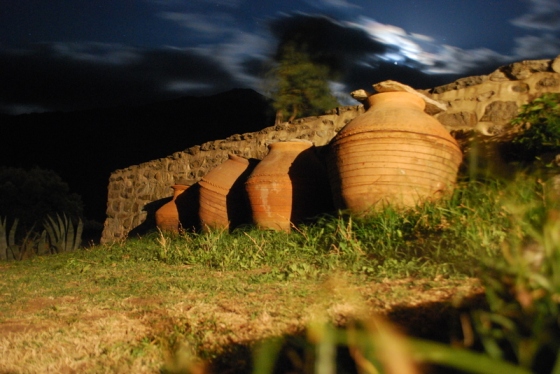 According to Wim and Herman, who shared the adjacent bedroom, Jaap and I performed a – rather loud – snoring symphony in canon.