862 – the Photo studio of Panteleimon II

In 861 I told about the two Dutchmen who discoverred the ruined photo studio at Panteleimon: I will continue their story by quoting a part of their story.

This is the story:
Finally, almost forgotten behind a mountain trail, the photo studio. The facade collapsed down. The first room is in the open air and empty. In a small parlor one sees a great mess. Pages from magazines, torn pictures, dust and vermin. One of the two backrooms must have been the actual studio. It is a large, light space, with in the middle a huge studio camera. The wooden box from the camera is the only thing left: the lens has disappeared. In the corner stands a picture frame with a passepartout and some photos: portraits of monks and of somebody who might have been the abbot of the monastery. Everywhere scattered pieces of a scenery. In the other corner lies a small round table”. 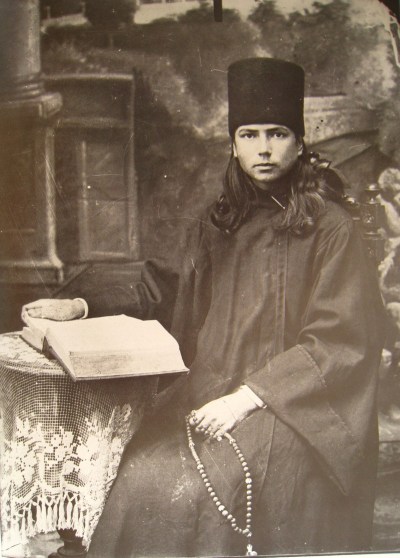 Another young novice, with long hair holding a bible and a rosary (and a round table)!

“The other backroom has been the laboratory of the photo-shooting monk. This room is mostly destroyed by fire. On the floor lies a scorched tube, used to enlarge pictures. Spread over the workbenches lie decimeters high broken glass-negatives, an irreparable damaged historical treasure. Most glass-plates are broken, others stick together in large stacks. Only on fragments you now and then see something: a scenery, a part of a face. One can see hundreds, maybe thousands of destroyed pictures of the Orthodox way of living in a monastery in the beginning of the 20th century.

Two monks with rosaries in their own habitat

In a corner of the dark room that was not devoured by fire stands a cabinet. Bottles with dried chemicals, stacks of bleached photos and on the bottom a few boxes with undamaged glass negatives: monks, pilgrims and military, the Campagne d’orient 1917-18. 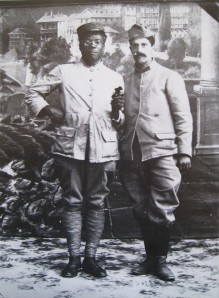 Two soldiers of unknown origin, maybe French, because one of them is black, which might indicate he is from a French colony (the other white guy looks like Ben Turpin) 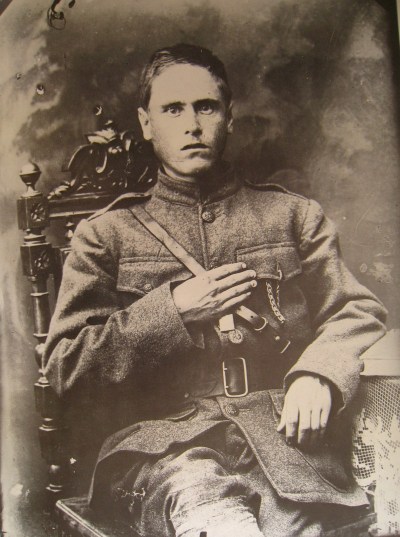 Another unknown soldier of the 1st World War, with his hand faithfull on his hart

A pilgrim with his stick and pipe

This ends this story: while writing I wondered if Rolf Bos maybe has more negatives than shown in this magazine ……

This entry was posted in 19 Panteleimonos, history and tagged Rolf Bos, vintage. Bookmark the permalink.

3 Responses to 862 – the Photo studio of Panteleimon II