638 – The 5th of December: the feast of Sinterklaas (Agios Nicolaos) – in Holland

Posted on December 5, 2008 by athosweblog

This article not directly related to Athos/The Holy Mountain.

The Sinterklaas-feast is an old Dutch and Belgian tradition, but the Saint does not have the same religious meaning as in Orthodoxy.

Icon of Agios Nicolaos, made in 1986 by Pachoumeou brothers near Kareys/Athos, in my possession.

This is the story:
Some three weeks before the 6th of December, the day Saint Nicolas died in 342, Sinterklaas arrives by boat from Spain, where he lives during the summer, together with his servants, nowadays called Pieten (Pete’s) and his boat full of presents. This arrival is shown live on Dutch television on a Saturday and usually the next day the Sint arrives in all cities in Holland, in a small or large parade. He climbs his traditional white horse called ‘Americo’ and will visit schools, supermarkets, hospitals and institutions in next three weeks. 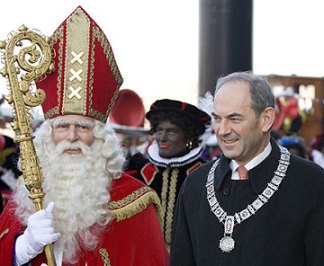 The Sint expects the children to have behave well the last year and if they did, they will be rewarded with gifts on the evening of the 5th of December. In the former days naughty kids also got punished by the Pieten, but this habit is no longer fashionable. The Petes have their faces (partly) painted black, they wear colourful suits and on their wigs they wear berets with large feathers.

The young children, who still ‘believe’ in the existence of Sinterklaas, are allowed to put their shoe (together with some food for the horse, straw/a large carrot) in front of the heater and near the chimney (or any other place if needed). Before they go to bed the kids sing special ‘Sinterklaas’-songs (they can choose from more than 15 songs). The legend goes that the Sint rides his horse on the roof of the houses and the Piet delivers the gifts through the chimney. Of course the parents bought a gift and in the night they have to take away the horses food and put the present in the shoe. This ritual repeats itself a couple of times until the 5th of December, mostly in the weekends.

In the weeks before the 5th you can find special Dutch Sinterklaas candy in shops, like (not translatable names as) pepernoten, marzipan (shaped like a pig or a sausage), chocolate-letters and different kinds of spiced cookies.

Sinterklaas-candy
Just before the 5th of December even the adults get nervous, because this evening, called pakjesavond, everyone, but especially kids, get their presents, after the traditional songs are sung. All gifts are anonymous, that means all gifts come from the Sint, you will not see who bought it.
If kids grow older and no longer ‘believe’ (it is a big shock when they are told the Sint and his Petes do not exist) and amongst adults there is a tradition to make one ‘surprise’ on the 5th of December for a person and to write a poem that comes with the gift. The ‘surprise’ can be anything (you can make something to hide your gift in), as long as it is original and made by yourself. The poem must also be written by yourself and it is custom to be a little bit critical about the person who gets the gift.

Sinterklaas amongst his Petes Dam square in Amsterdam – 2017

This entry was posted in events and tagged nicholas. Bookmark the permalink.

2 Responses to 638 – The 5th of December: the feast of Sinterklaas (Agios Nicolaos) – in Holland