Posted on October 4, 2008 by athosweblog

During a visit to the Holy Mountain nothing ever goes as planned. In 2007 we had high expectations of our visit to Pantocratoros and because of this we already reserved a place in this monastery by telephone, but we decided not to use this opportunity. And that while Jeltsinâ’s Greek hairdresser told so many good stories about this monastery and we were very anxious to pay a visit.
I have start telling you that I have to pay credits to the archondaris (guestmaster), because it was absolutely not his fold that we decided to leave so soon, because he was very friendly on the telephone: but if I look back on this conversation, I now realize that he sounded a little surprised that we wanted to spend a night at Pantocratoros.
At the front door everything seemed all right, that is to say, we were greeted by a few happy laborers, who were just busy filling a cement mill ………….. 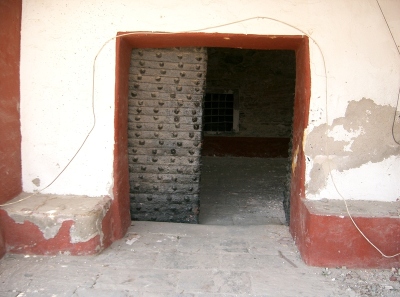 On this picture nothing strange is to be seen, but it is a distorted image, because the entire interior of the monastery was almost in ruins because of a very major renovation that was taken place. There was even a sign with the notice: NO ACCOMODATION !

Just after we arrived there was no archondÃ¡ris to welcome us, but we found our way to the big waiting room, were we could rest and have a glass of water. After a half an hour we started to be a little restless and wondered what to do. Soon after two elderly Greek man came in and also sat down. My travel-mate, who by coincidence stood next to the water can, was trying to be polite and offered one of them a glass of water. He accepted the glass without saying something: he just nodded. Instead of drinking the water he waited one minute, stood up again and poured himself a new glass of water and drank it greedily. We looked at each other full of surprise. Why wouldn’t he drink the water we offered ? What did we do wrong? Did we have the wrong nationality or might it be the wrong religion ? We never found out and it isn’t really important to know, but still we did not expect such rude attitude. Probably they never even noticed it.
Oke, after this small incident we waited outside in the sun, but then it started. The workmen resumed their work after the lunch break and started picking up there large drills. Soon after you were not able to talk to each other, while we waited there for over an hour ! It was as if I was back in Amsterdam, it remembered me of the useual noise of the city, and this was not what I expected to find in this idyllic spot.
Just as we decided to go the archondariki came down and he tried in despair to get us to stay. Unfortunately his voice could hardly raise above the noise of the drills, so we gave him our regards and we left the construction site.
Yet another reason to go back to the Holy Mountain, because I would love to go back to this beautiful monastery and the friendly guestmaster (hopefully september next year).

We continued our journey along a breathtaking path near the coastline, where we had this view of Pantocratoros. 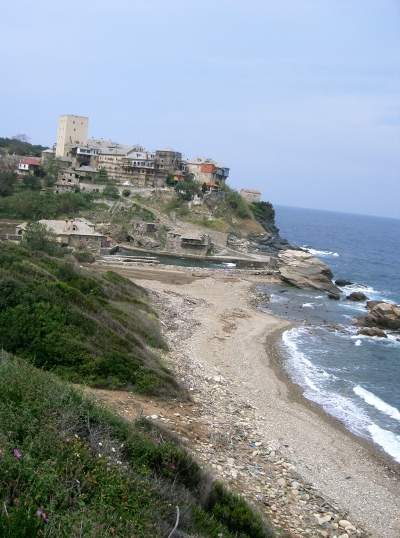 and underway we saw a couple of ruined houses/farms (kellia):

and then Stavronikita shows up in the distance:

beautiful situated on a rock sticking out in the sea. 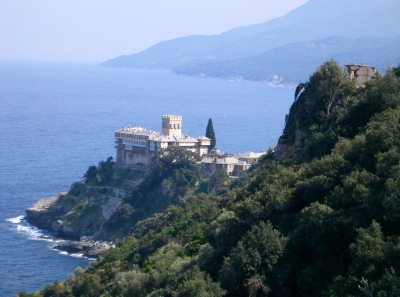 and you enter the monastery from the backside where you will see these buildings:

But next time I will tell you more about our unforgettable visit to Stavronikita !
Wim, 5/10