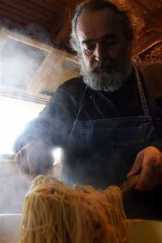 Greek Orthodox monk Father Epifanios lifts spaghetti out of a pot at the chapel of Mylopotamos, near the monastery of Great Lavra, at the Orthodox sanctuary on Mount Athos, Tuesday, March 18, 2008. Food cooked at the sanctuary _ billed as a strict form of the Mediterranean diet _ has enjoyed a wider appeal among Greeks who have become increasingly health conscious. (AP Photo/Nikolas Giakoumidis)

In a large, deep skillet over medium-high, combine olive oil, garlic and onion. Saute until onion just begins to soften, about three to four minutes.

Add plums and saute another two minutes. Arrange cod over onions and plums, then add enough water to come halfway up cod. Sprinkle cod with salt, then bring water to a simmer, cover and cook 15 minutes, or until the cod flakes easily.

Sprinkle lemon juice and parsley over cod, then season with pepper. 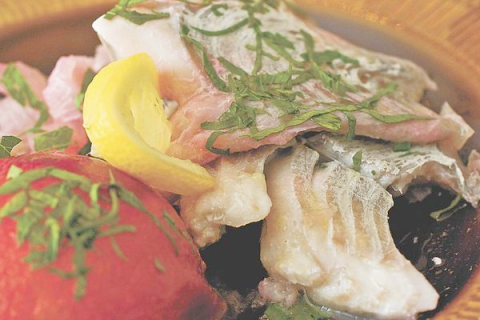 This entry was posted in food, Mylopotamos and tagged Epifanios, recipes. Bookmark the permalink.

7 Responses to 534 – Recipe by father Epifanios