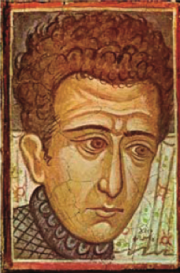 Upon Kontoglous arrival at Mount Athos (1923), a fashionable destination for the most prominent intellectuals, Kontoglou would exclaim: ‘I must say I had not expected to find such perfect art in the monastery churches. From what I had read about Byzantine art I had formed the idea that it was less worthy of attention than the art of the Italian Renaissance… [but] on Mount Athos there are paintings of the most superb artistry, such as the Archangel Gabriel and St. Merkourios by Katelanos. So far as I am in a position to judge, it is very seldom that one comes across paintings executed with such shrewd artistic judgment and charged with such powerful rhythm. I approached these paintings with a feeling which arises from a cast of mind similar to that of the Byzantines and from a strict Christian upbringing’ (The Art of Athos, c.1923, quoted in Nikos Zias, ‘The Greek Tradition and Fotis Kondoglou,’ Zygos, vol. III, Athens, 1984, p. 58). Copying frescos and icons would lead Kontoglou along the visual path to a neo-Byzantine purity and austerity, and the Asia Minor tragedy of 1922 in which Greeks were expelled from Anatolia would give Kontoglou intellectual and spiritual momentum.
Text from Sothebys. 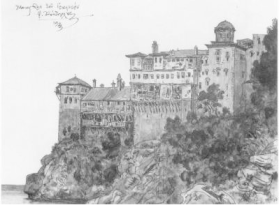 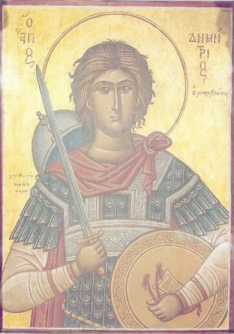 This entry was posted in basic information/reservations. Bookmark the permalink.