As described in post 134 we saw the view of the skiti unfolding in a magnificant way:

Over this road we closed in to the Skiti:

and while walking along the gardens we saw Pantocratoros lying beneath us:

On arriving we got very friendly welcome by the Greek monk Filemon, whho spoke perfect English (he lived in London during the Punk times in the 80-ties). We were treated good with tsiporou, fresh watre from the well and candied apricots, walnuts and raisins. 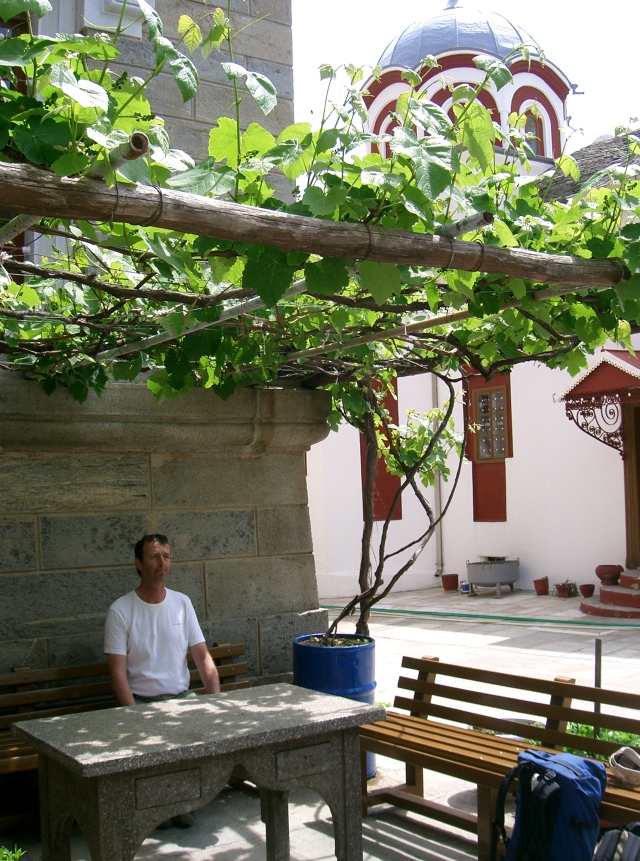 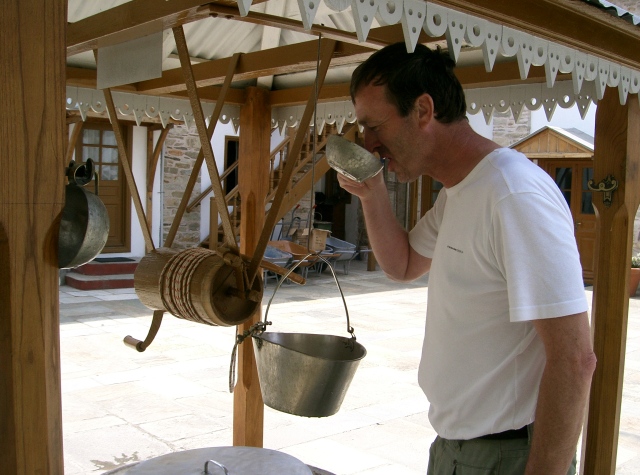 The Skiti is well kept and beautifull maintained with fresh paint everywhere. Filemon told us the whole stoty of the skete and he seemed to like us visiting the spot, because he was joking all the time: to start he had some trouble with our Dutch names. Wim or William wasn’t that difficult, but the Frisian name Jizte was to much for him: Filemon decided to call my friend Jeltsin! “William and Jeltsin”, he said, while hitting our shoulders in a comeradeship way, “there is to much misery on earth, that why there should be a lot of laughter!

The Skete is in 1992 taken over by the Greeks. At that time two old Russian monks lived there, who like the zelotes of Esfigmenou, did not see patriarch Bartholomeus from Constantinopel as their highest in rank, but an abbot from a church in New York. The Skete was acqiured by 10 Greek monks, what happenend to the old guys Filemon did not tell…. 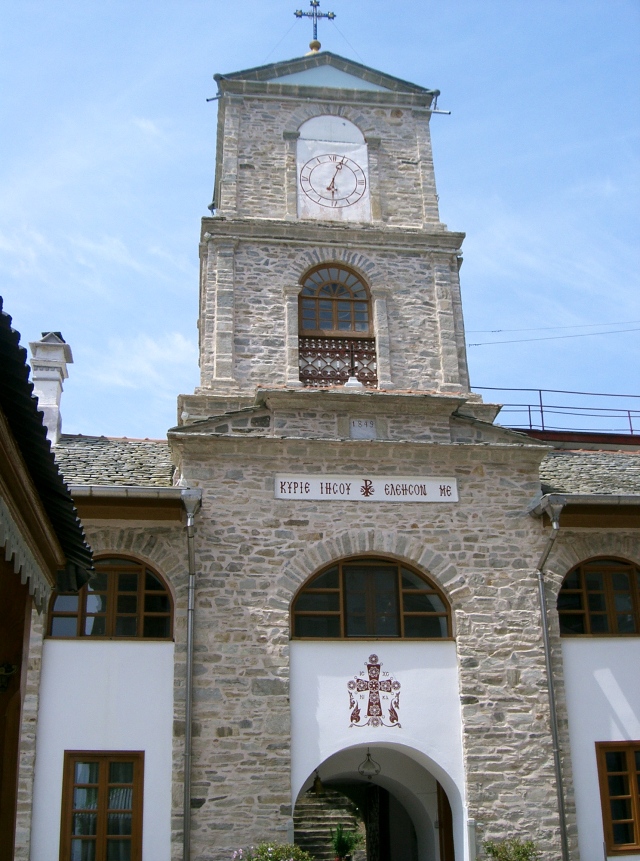 As told Filemon spent his younger years as a punk in London, but now he “was breading fresh air of Athos” and he was completely happy.  In the winter he paints icons en in summertime he takes care of the guests. He knew by the way the Pachoumaiou”- brothers (the ones who painted my Nicolas icon), see nr 31: 12-2006). It was said that they were in the US at the moment and the were famous in the meanwhile. According to Filemon their works were very valuable nowadays …………. An icon painted by Filemon would cost about € 1.000,00.

The church is beautiful and can host about 2000 visitors. He proudly mentioned that guesquarters were fully restored and that there is space for 1000 visitors ! Unfortuanately the abbot wouldn’t allow non-orthodox pilgrims to use these facilities…….
De Skete was founded some years ago with money from Odessa. In the church hangs a wonderworking icon of the Panaghia that was donated by a Russian general who served under the Tsar.

The icons belong according to Filemon to the Kretan school. Many of the relics in church were bought.

Filemon told us that if you look at the feet of the painted figures they will turn towrds you if you change possition, like in old Dutch paintings. Filemon asked us to send him a book af the Dutch “icon-painter” Rembrandt, agian one of his jokes! (which we did after our visit to Athos).
Incidentally, he had bad experiences with photos taken from him by visitors, hence no picture can be seen here from our humorous friend. His sister once called him because she had seen him in a Sony advertisement, and a photo of him was used without permission(!). Since then, he had become more cautious, and rightly so.

In his shop we bought some small things, like this home-made tsiporou.

This entry was posted in Skiti Profitou Eliou, trip 2007. Bookmark the permalink.